Various pieces of evidence suggest what Ben Jonson looked like. They are fragmentary, and in some cases conflicting, but overall our current state of knowledge offers a reasonable impression of his appearance. This is more than can be said for many of his writer contemporaries.

John Aubrey stated that ‘Ben Johnson had one eye lower than tother and bigger’ and that he ‘was (or rather had been) of a clear and fair skin; his habit was very plain. I have heard Mr Lacy the Player say, that he was wont to wear a coat like a coachman’s coat, with slits under the armpits' (Life Records, Aubrey). In 1619 Jonson described himself as having a ‘mountain belly, and … rocky face' (Underwood, 9.17). Both William Drummond of Hawthornden (Informations, 556-7) and Aubrey noted Jonson’s fondness for drink, which may have had an effect on his appearance.

Only one secure image of Jonson survives. Many versions of it are extant, of which the one in the National Portrait Gallery, London (hereafter NPG), is now generally accepted as the original (   ). 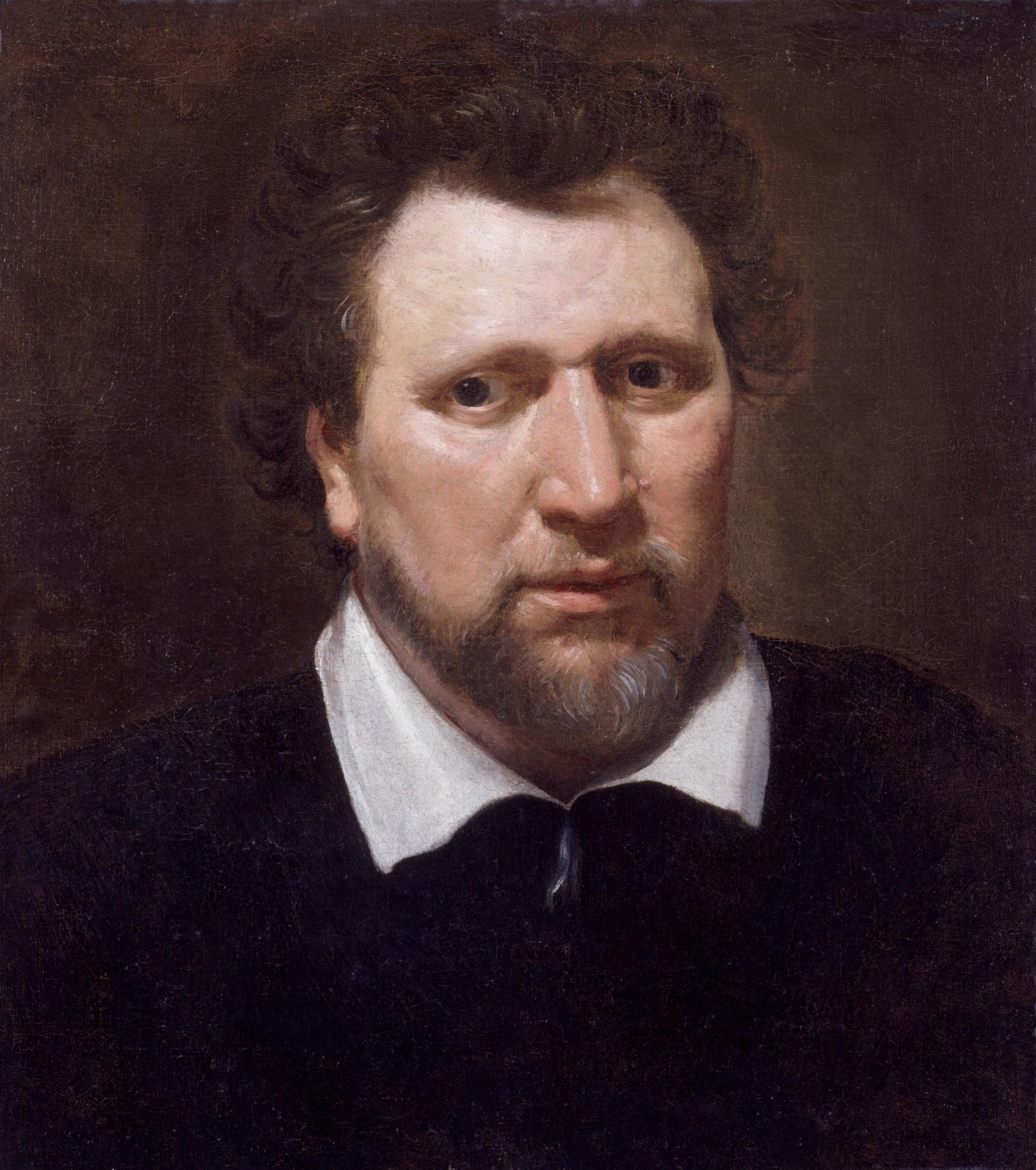 In or around 1627, it formed the basis for an engraving by Robert Vaughan ( the encircling Latin lettering on which described it as ‘VERA EFFIGIES DOCTISSIMI POETARVM ANGLORVM BEN: IOHNSONII’: ‘an accurate likeness of Ben Jo[h]nson, most learned of the English poets’ (translation by Dr Keith Cunliffe). 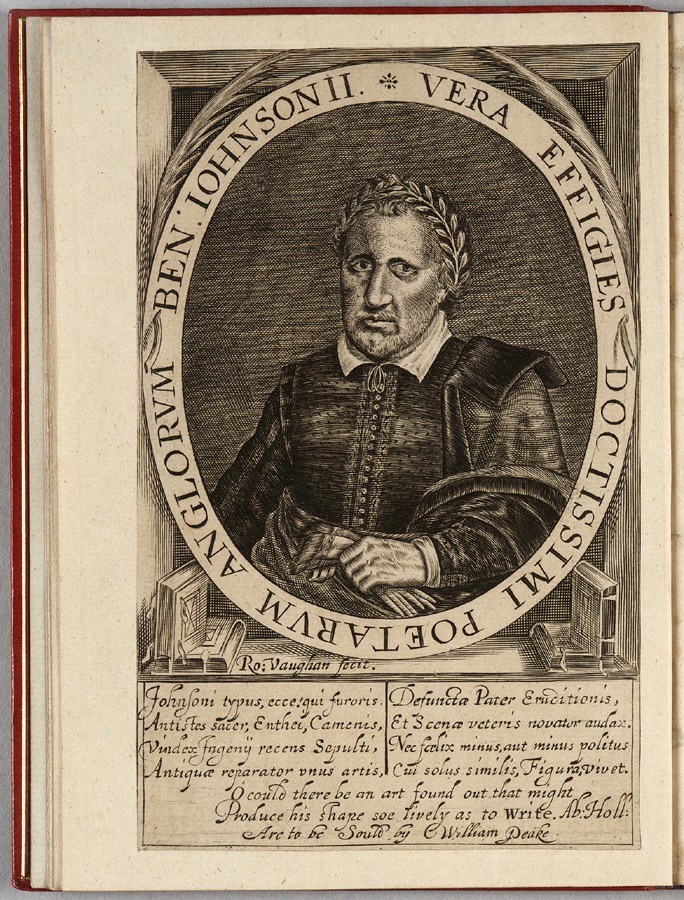 The NPG portrait is painted on canvas, and depicts its subject almost face on, looking directly out at the viewer. This confers a somewhat confrontational air –consistent with what is known of Jonson’s personality. He is simply dressed, suggesting the plain habit mentioned by Aubrey, and his eyes do appear to be at differing levels. There is a wart to one side of his nose (as seen by the viewer, the right-hand side). It is a head-and-shoulders portrait, which means that Jonson's bulky torso is not shown. Its dimensions are 47cm high by 41.8cm wide (18 3/8 x 16 3/8 inches). The painting was cleaned and conserved in 1984, since when it has been possible to assess its content and calibre more clearly.

It is thought to be the picture referred to, in an inventory taken in 1635 of the paintings at York House in London (where it hung ‘In the Passage by the Ladies’ Closet’, among paintings attributed to Rubens), as ‘Blyenberke. – A Picture of Ben Jonson’ (Davies, 1906-7, 380). York House had belonged to George Villiers, first Duke of Buckingham, and the contents are presumed to have remained there following his death in 1628.

According to this inventory, the first Duke kept only seventeen portraits at York House (his main London residence, at the west end of the Strand). The majority of the paintings there were Italian and Flemish works of classical, biblical, and other narrative subjects. It is intriguing that Buckingham should own a portrait of Jonson, with whom he was particularly in contact during 1621, when Jonson’s masque The Gypsies Metamorphosed was performed at Buckingham’s estate in Rutland, Burley-on-the-Hill.

It is not clear what happened subsequently to Buckingham’s portrait of Jonson (for the collection and its dispersal, see Betcherman, 1970; McEvansoneya, 1986; McEvansoneya, 1994; and McEvansoneya, 1996). It is not specifically mentioned in the list of paintings sold in Antwerp in 1650 on behalf of Buckingham’s son, the 2nd Duke (Duverger, 1984-2005, 5.70-77). The early history of the NPG portrait is not known. Prior to its purchase in 1935 from a London art dealer, Sydney Wise, it had been owned by a Henry Bates of Salisbury, and before that said to have been at Oldstock House, Wiltshire, the residence of the Webb baronets.   Successive heirs to this baronetcy, which was created in 1644 and became extinct on the death of the seventh baronet in 1874, had married into the Caryl, Blomer, Belasis, Moore, Gibson, Salvin, Dillon, Boyne and Somerville families (Cokayne, 1900-6, 2.220-1).

Stylistically it is plausible that the Netherlandish artist named in the 1635 inventory, Abraham van Blyenberch, painted the NPG portrait. Comparisons can be made with the handling of his signed portrait of William Herbert, Third Earl of Pembroke, 1617, who was also a patron of Jonson (at Powis Castle; reproduced in Hearn, 1995, 204-5). Van Blyenberch (1575/6-1624) was born in the Spanish Netherlands. By late 1617 he was living in Antwerp, from where he evidently set off for London. There he portrayed some of the most elite members of the court: not only Pembroke, but also Robert Ker, later first Earl of Ancrum, in 1618, and Charles, Prince of Wales, later Charles I, c.1617-20. In 1621 or 1622 he returned to Antwerp, where he died late in 1624 (ODNB).

This means that van Blyenberch’s portrait of Jonson must date from no later than 1621/22. Given the lack of grey in the sitter’s hair – there are just a few silver threads at his right temple, and in his beard – it seems plausible to speculate that Jonson is shown in his mid-forties, suggesting an approximate date of c.1618. Blyenberch’s surviving portrait of Prince Charles, particularly, is characterised by a baroque ebullience, and it seems somewhat unexpected that this artist should have been commissioned to produce such a simple representation of the soberly attired Jonson.

A considerable number of copies and versions of the NPG head-and-shoulders image of Jonson survive. These include one at Welbeck Abbey (first recorded in 1741: see Goulding, 1936, cat. no. 3), and another at Knole, Kent (first recorded in 1728; Strong, 1969, lists many of the versions and derivations). Gilchrist in 1816 refers to one ‘in the picture gallery at Oxford’ (Gifford, 1816, 1.ccclx). This painting was among the various portraits in the Bodleian Library that the Dutch-born mezzotint-maker John Faber I (c.1660-1721) engraved following his visits to Oxford in 1711 and 1712. It was at that time, probably erroneously, attributed to the London-born Cornelius Johnson painter (no relation to the poet) (J. C. Smith, 1883, 269). By 1912, this painted portrait seems to have been lost, and the only portrait of Jonson by then in the Bodleian was one presented only in 1732 by Dr George Clarke (Poole, 1912-25, 1.129, 40).

Another version, now unidentified, was in the collection of John, Lord Somers (1651-1716). It was engraved in 1711 by George Vertue ( who erroneously attributed it to the Dutch artist ‘Gerard van Honthorst’ (1592-1656). The slight turn of the sitter’s head and body to the viewer’s right is reversed in this engraving, so that Jonson inclines instead towards our left; it includes more of Jonson's torso than does the NPG portrait, showing his upper arms and a mantle looped over his right shoulder. This engraving, in turn, seems to have been copied by subsequent painters, and thus to have been the basis for some of the later images of Jonson. For instance, a portrait miniature of Jonson in the Royal Collection, which is paired with a miniature of the writer John Fletcher (1579-1625), both by the same unknown painter, may have been based on Vertue's engraving (Reynolds, 1999, 108-9 [cat. nos. 78 and 77]). 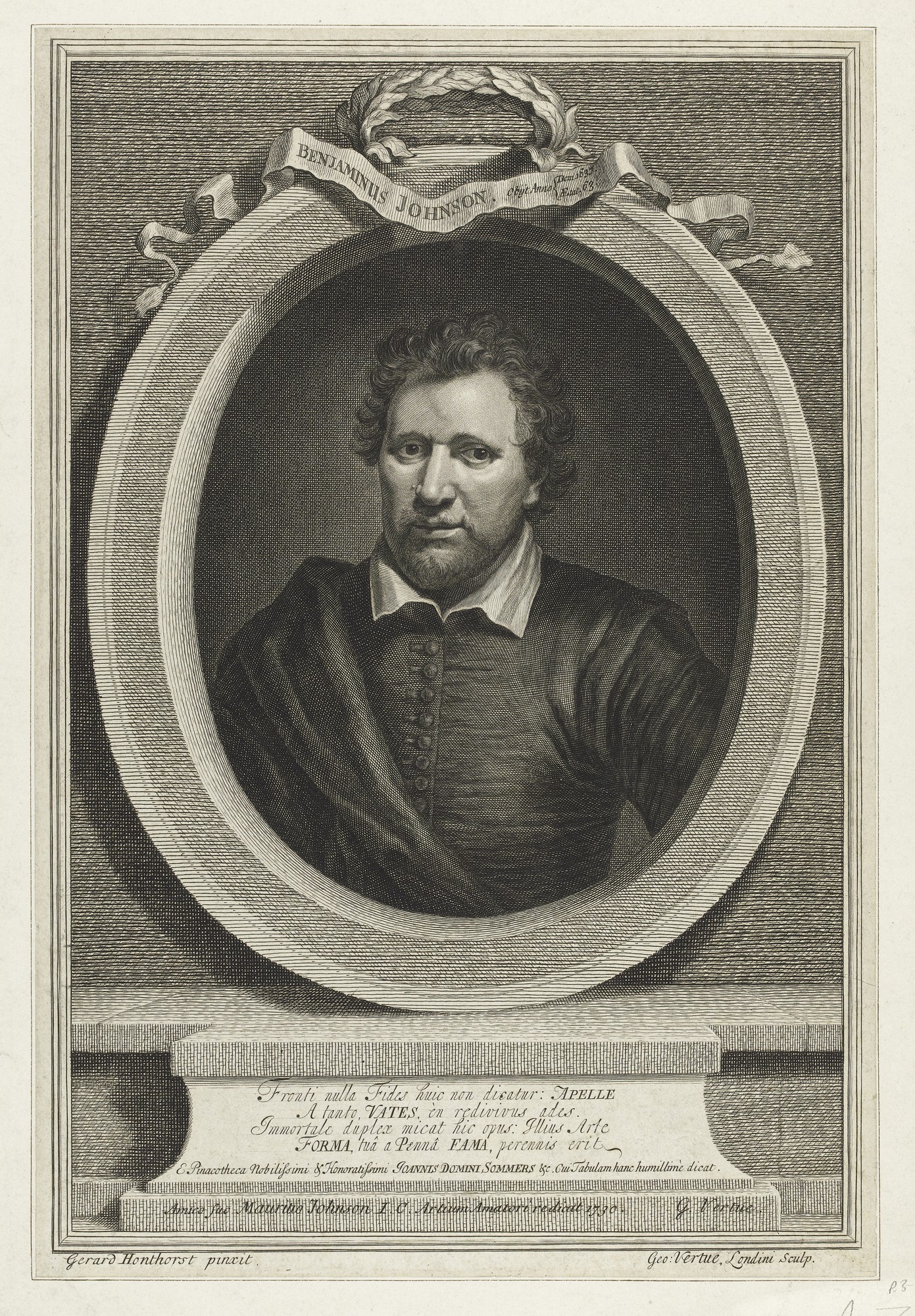 A version of the NPG portrait – probably, again, after Vertue’s engraving, given the direction in which the head is turned – seems to have been used by the architect James Gibbs c. 1723 in his design for a monument to Jonson in Westminster Abbey (). The monument, whose execution is attributed to the sculptor Michael Rysbrack, was commissioned by Edward Harley and erected in the eastern aisle of Poets’ Corner (Friedman, 1984, 99-100, 314). 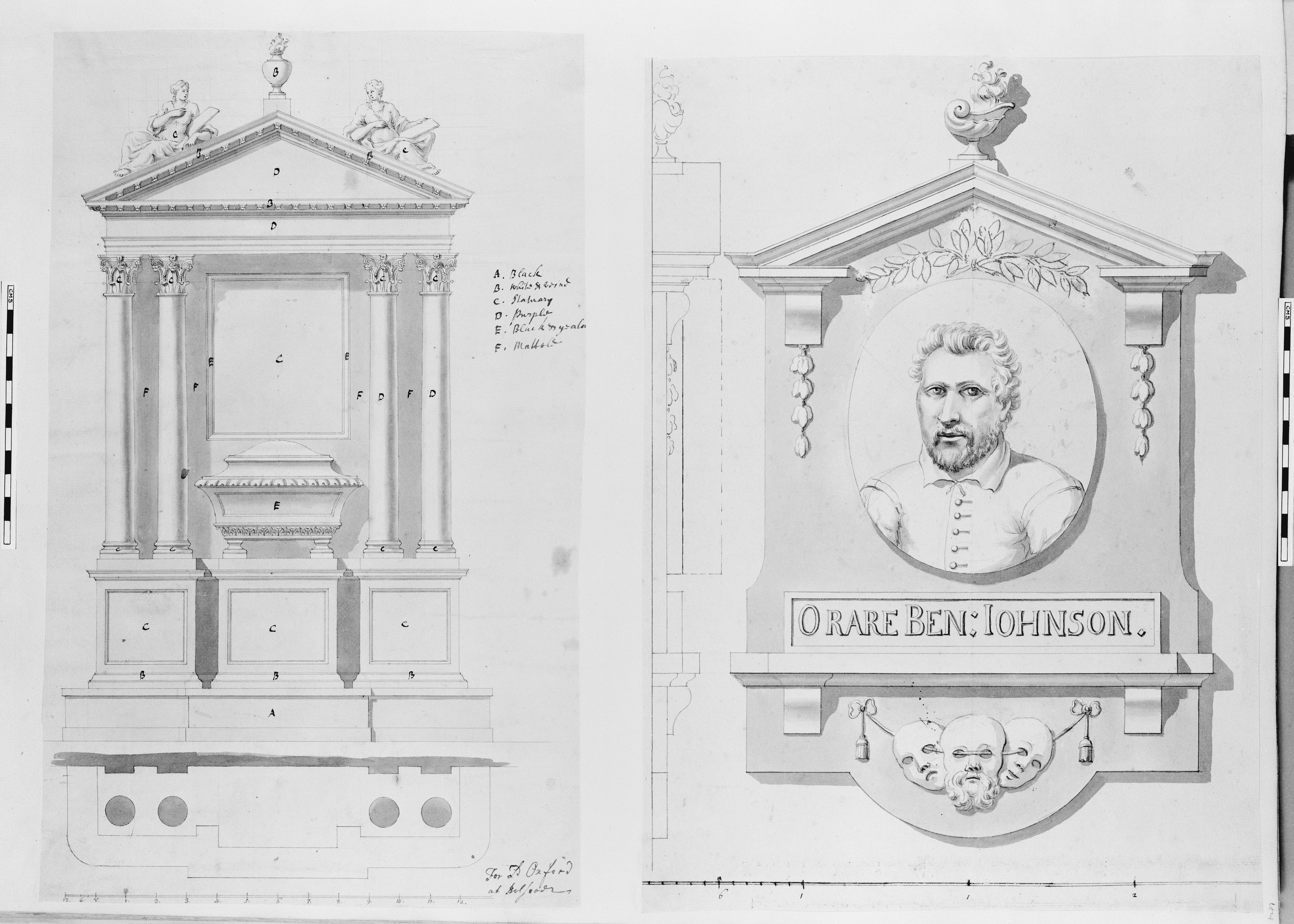 The NPG type was also used as a basis for much freer, sometimes more elaborate, later images. These include one that shows Jonson seated in front of a window opening with curtains, a quill pen in his right hand, and a book under his left arm as he leans against a book-covered table. Formerly in the collection of the Viscounts Clifden, at Wimpole Hall, Cambridgeshire, this painting is now at the University of Texas at Austin.   Based on this work was an engraving that describes the original as being in the collection of the [third] Earl of Hardwicke (whose forebear had purchased Wimpole Hall in 1740), and which was drawn by J. Thurston, engraved by C. Warren and published by W. Walker in 1820. (O’Donoghue, 1908-25, 2.661-2 gives an extensive list of the various portrait prints of Jonson.)

National Portrait Gallery, ref. no. 2752, see H&S, 5.xi-xiii, and Strong (1969), 183. For many years, the painting was erroneously associated with the name of the Dutch painter Gerrit van Honthorst (see below).

I am also grateful to James Knowles for discussing this question with me.

NPG file notes; see also Strong, 1969. It has not proved possible to connect it with any of the versions mentioned by Octavius Gilchrist in his essay ‘Portraits of Jonson’ in W. Gifford, ed., The Works of Ben Jonson (1816), 1.ccclvii-ccclx.