In taking this course I have followed the then unusual prioritising of Q first adopted in an extreme form by de Vocht (1935) , and proposed in a more measured way by Greg (1950-51) , 35 as ‘the natural course to pursue’ in a separate edition of Sejanus. This course was supported in theory by Bowers (1978) , 112-19 and Jowett (1991) , 264 and followed in practice in editions by Ayres (1990) and Kidnie (2000) . All other editors from 1640 on have followed F1, a course more understandable for Whalley , Gifford, and Herford and Simpson , all of whom were avowedly following the example of F1 in producing a ‘Complete Works’. The separate editions by Briggs , Bolton , and Barish were also, less defensibly, based on F1. De Vocht’s was a type-facsimile edition, but Ayres’s was a modern-spelling eclectic text based on Q. As such it preserved much, though not all, of the distinctive use of upper-case type, but incorporated translated versions of the marginalia in the commentary, thus obscuring their impact. As Jonson makes clear in his preface, his notes were not intended to be so user-friendly: ‘it was presupposed, none but the learned would take the pains to confer them’ (To the Readers, 24-5).

When it appeared in 1605, Seianus his Fall was the fifth of Jonson’s plays to be printed, following Every Man Out (1600), Every Man In, Cynthia’s Revels (both 1601), and Poetaster (1602). It was entered in the Stationers’ Register on 2 November 1604, by Edward Blount (Arber, 1875-94 , 3.273; Greg, 1939-59 , 1.19). Blount did not have the play printed, possibly because it was still in the repertory of the King’s Men during 1604. Instead, on 6 August 1605, he ‘putt ou[er]’ his rights to the stationer Thomas Thorpe (Arber, 1875-94 , 3.297). Thorpe had it printed later that year (i.e. sometime before 25 March 1606) by George Eld. During 1605 Eld also printed Chapman’s All Fools for Thorpe, and three editions of Eastward Ho!, for William Aspley. Later he was to print Volpone (1607) and The Masque of Blackness (1608) for Thorpe, and in 1609 Shakespeare’s Troilus and Cressida and Sonnets, the latter again for Thorpe. Although during 1605 he printed or had a share in printing at least seventeen books, Eld was still a relatively new master. He had gained his freedom in 1600, and had only acquired his business in 1604, by marrying the widow of Richard Read, the printer of Cynthia’s Revels. The printing house which the widow Read brought Eld was in Fleet Lane, opposite the modern Old Bailey, at the unimaginative sign of the Printer’s Press, a site which was (possibly to Eld’s regret) only a short walk from Blackfriars, where Jonson was living in 1605 in the house of his patron, Esmé Stuart, Seigneur D’Aubigny (H&S , 11.576-7).

Eld is best known to bibliographers for his printing of Shakespeare’s Sonnets and his rather careless editions of Eastward Ho! and Troilus and Cressida. Sejanus has its share of errors, but overall it is a much more carefully finished product. The copy Jonson gave Eld was unprecedented for a vernacular play, with demands for detailed and copious marginalia (there are just over three hundred Latin notes), and passages within the main text that set out to reproduce Roman inscriptional style. Since Jonson had revised the playhouse version substantially, it was probably his own fair copy of the new version that he gave to Eld. In this his notes would have been inscribed as marginalia in their appropriate place, rather than on separate copy. A very good idea of the probable appearance of Jonson’s holograph can be gained from the presentation copy Jonson made around 1609 of The Masque of Queens (BL Royal MS 18A 45). Page 4, illustrated below, resembles Q’s K4v in the way the annotations embrace the short passages of text: 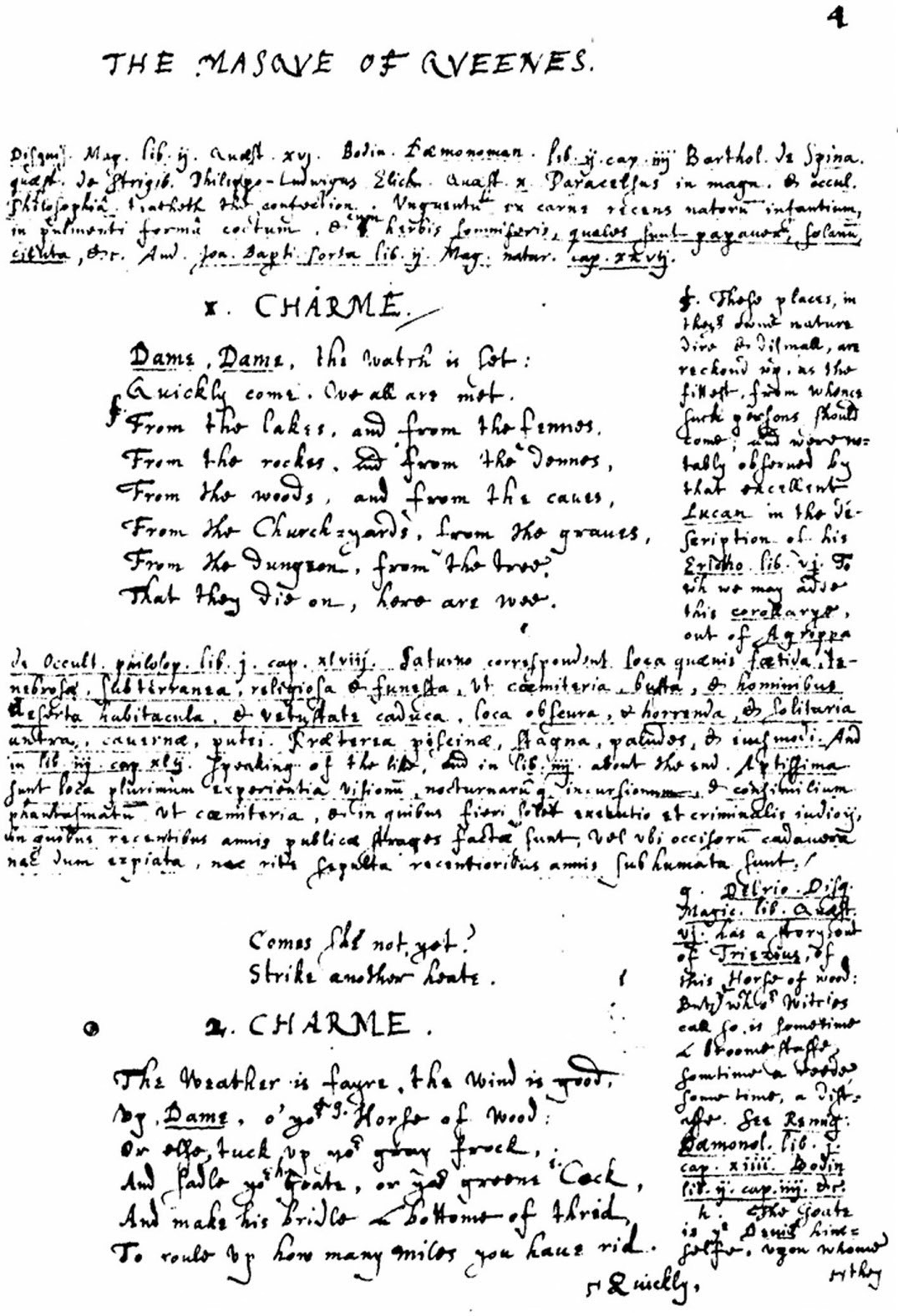 Eld may still, of course, have had his own copy made to enable him to cast off for setting by formes more accurately. In either case, his compositors would have been able to relate the notes to the blank verse relatively simply. This problem would anyway not have been new to them; though its design and layout was novel for a play (Poetaster, the first English play with marginal notes, has only seven, much shorter ones, in its quarto version), the technical demands were not unusual. Jonson and Eld had themselves been responsible for one important precedent: Eld had printed Part of the King’s Entertainment, a similarly annotated quarto by Jonson, the previous year. This not only had copious marginalia, but had included a page (D3) which, in large type, imitated the style of a Roman monumental inscription in a way that may have encouraged Jonson to transfer the device to Sejanus. Though it is attributed to V.[alentine] S.[immes] on the title-page, Eld is now thought to have printed all but the first two gatherings of this book, which also included A Panegyre, and the Particular Entertainment at Althorp (Lavin, 1970 , 335; STC, 14756). Illustration 2 shows pages D1v-D2 from the British Library copy of the Entertainment: 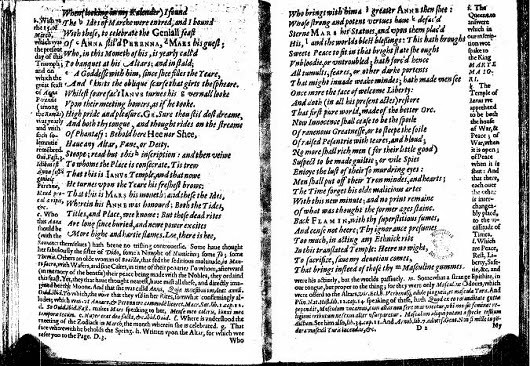 Just as the layout here prefigures that on Q K3v-K4, so does the inscription on D3 prefigure the use of type on M1: 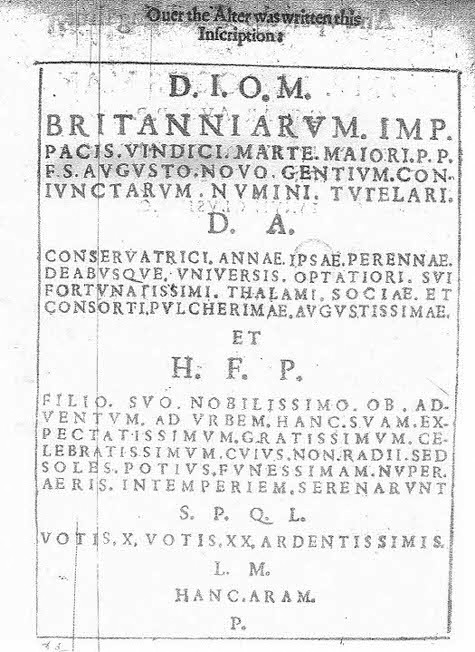